Designed and implemented a media player system in 'C'. The system was capable of playing different songs at normal, double and half speed. This was implemented using a combination of polling, synchronization, timers and interrupt handlers to interface with the devices (Push buttons, LEDs , Switches) on the Altera DE2 board. NIOS II IDE was used for development. 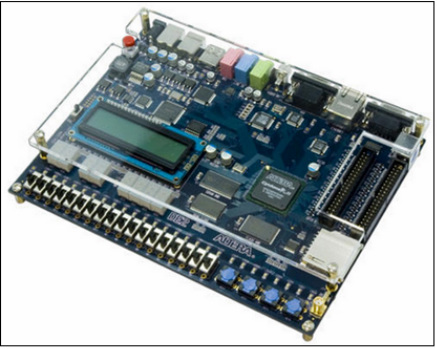 Altera DE2 Development and Education Board

Two ISR's were created for implementing the functionality in phase1: the timer ISR, and the button ISR. The button ISR is initialized at the start of the program, and an interrupt is generated upon a button press. Whenever a button is pressed, the interrupt handler checks whether or not the first or second buttons are pressed, and stores this value into a global variable. The first and second button corresponds to LED-activation, or seven-segment display activation, respectively. If either button is pressed, the ISR will do three things: store the status of the first 8 DIP switches into a global variable, set a global variable known as timer_count to 0, initialize the timer to start sending timer interrupts every second. The timer ISR, once set, will handle an interrupt every second. During each interrupt, a global variable (denoted as timer_flag) will flag on.

For phase1, a background task must occur (monitoring switch states for processing the LEDs/display). If buttons are pushed, they must be serviced right away, and this will immediately affect the background task. Upon pressing a button, the state of the active switches will be stored immediately.


Advantages of using Interrupts:          - Setup an Interrupt vector
- Reset the edge capture register by writing a value to it
- Enable the interrupts for button1 and button2
- Implement the Interrupt Service Routine keeping it short and simple for better performance

Each of the two methods were tested and analysed and it was found that the approach to use interrupts gives an overall better performance as compare to Periodic polling (specially with respect to our lab obejective i.e., minimizing the number of missed pulses). This is because it reduces the missed pulses to zero and provides for higher number of background tasks processed. Moreover, the maximum latency is also lower and more consistent for interrupts than it is for polling.

Results Obtained:
i) The fractional value of max Latency expressed is a fraction of the period e.g, 81 / 1024th(s) refers to 81 / 1024th(s) of a period.
ii) Tasks refers to the total background task units processed 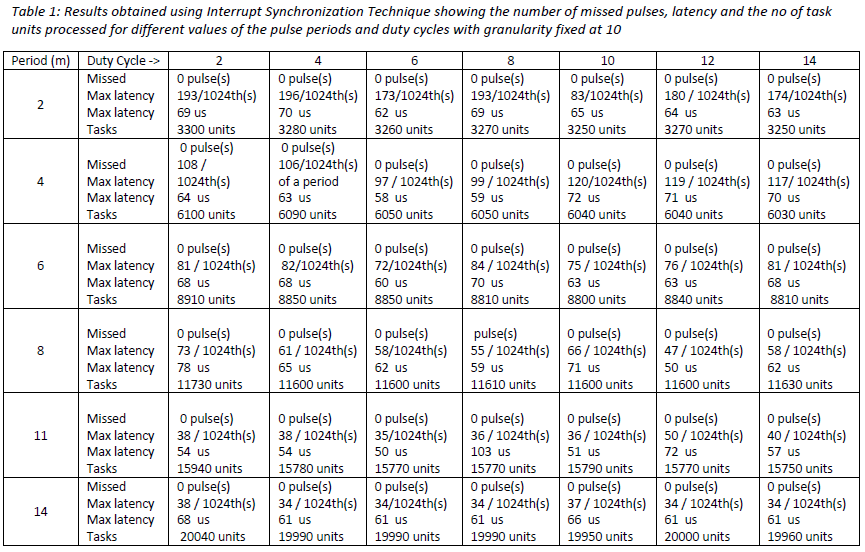 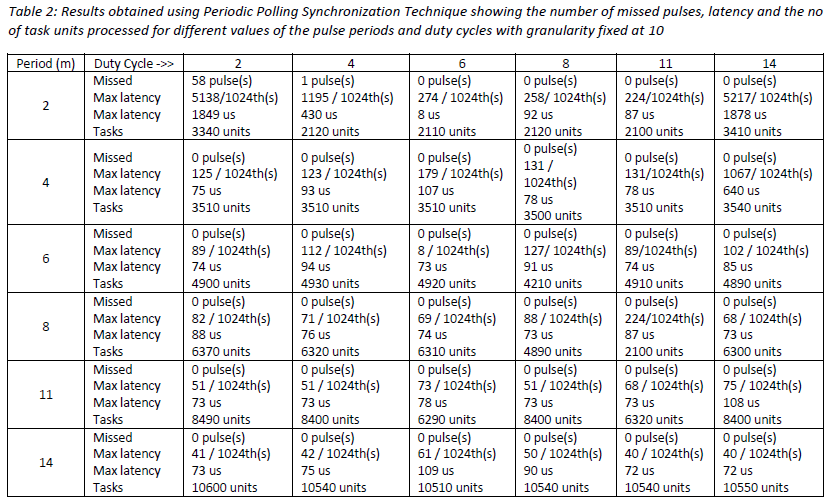 Conclusion: Interrupts provide a better overall performance as compared to polling for achieving our design objectives.

Download File
The goal of lab2 was to build up on lab1 in order to implement a media player system. The figure below gives a visual representation of how our code was structured: 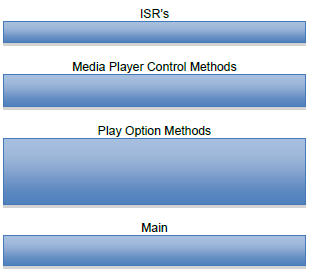 The ‘ISR Section’ of our code is responsible for servicing Altera DE2 button interrupts. This is achieved through the Button_ISR method. The Button_ISR method identifies which buttons were pressed, and toggles the appropriate global flags true or false depending on which buttons were pressed. For example, our code has 4 main global flags: play, stop, next_song, and previous_song. If the next button is pressed, then the next_song flag is toggled true while the rest are toggled false. These flags integrate with the main section our code, allowing users to control the media player depending on which buttons are pressed.

The ‘Media Control’ section is responsible for initializing the media controller, building song clusters, and controlling media player functionality (next, previous, stop, and play). The init method is responsible for initializing the required hardware for future use. For example, this function initializes the SD card, the MBR, the BS, the audio codec, and the LCD. Next, the buildCluster method builds a song cluster for the next song in the list. This cluster is stored as a global structure. Finally, our control method determines whether the media player is to play, stop playing, or toggle songs. This method essentially busy waits until a play, next, or previous flag is set through the button_ISR. When a button is pressed, the program will exit this busy loop, and perform the action that is associated by the flag that was just set.

The ‘Play Options’ section is comprised of the 5 methods: normal_speed, double_speed, half_speed, reverse, and delay_channel. Each of these methods initially call upon the buildCluster method to store the cluster of the current song. The code then cycles through each cycle, and then cycles through the cluster’s bytes. These bytes are then manipulated as required by the method, and then sent to the audio codec for audio playback. For example, normal speed will send all bytes to the audio codec from start to finish, whereas reverse play will send the bytes to the audio codec in a reversed order. As a side note, these methods will only function if the play flag is true. If at any moment the stop function flags on, the code will immediately break and stop playing.

Finally, the main section consists of the main method. This section will call upon the init() function to initialize the hardware. The main method will default to the control method, which busy loops until a button is pressed. Upon pressing a button, the busy loop will break, and the main loop will read which switches are high. Depending on which switches are high, the main loop will call upon the appropriate play method and loop back to the media control method upon finishing. Through this structure, the user is able to toggle songs and play/pause at their desire.

The .wav files to be played were divided into sectors which were further split up into clusters. In general for all modes, following were taken into consideration to enhance the audio playback performance:
Double Speed: For playing the song at the double speed, 2 out of every four channels were skipped. In this mode, the while loop which iterates over the different sectors in the song takes approximately half of the time to execute (as compared to the normal case) since we are skipping some channels. This implies that the SD card is required to supply data (for successive sectors) at a much faster rate.

Half Speed: For this mode, the same channels were played twice to produce the half speed effect. For this mode, it was not possible to achieve the play speed which was exactly half of the normal play mode . This might have been due to the performance issues related to the rate of data access from the SD card and the limitation on the efficiency of the audio codec player.

Delay Mode: For the delay mode, a one second delay was caused between the right and left channels.
It was difficult to verify that the delay caused between the two channels was exactly one second by simply listening to the audio.Moreover, for the case when a particular sector is finished, there are still some right channels left to be executed. Initially these remaining right channels were being missed and thus the audio sounded cut-off at the end. On reiterating through our logic we found that we needed to play the left over right channels after each sector (left channels) have been played. This was achieved by implementing two while loops – One to play the remaining channels in the current cycle through the circular buffer and the other loop to play the recently copied right channels starting from the zero of the circular buffer up-till the current position of the counter.

Reverse Mode: This was implemented by playing the sectors in the opposite direction. After the initial implementation, it was found that the sound didn’t appear like the reversed song. Hence the logic was reworked and it was found that I was reversing the channels but not the sectors. The sectors were still being executed from the beginning till the end. This was fixed quickly by changing the starting value of the sector followed by successively decrementing the sectors for each iteration